When one Repurpose Project Center closes, another opens.

Shane Sutherland originally launched his one-of-a-kind repurposing, recycling and merchandise site as a Facebook page, opened a storefront on East Maple Street, then expanded to South Cliff Avenue in early 2019. In June , however, he closed it. .

“Gasoline prices were high, rents were going up, things like that, and it was getting harder and harder to meet the goals financially,” Sutherland said.

Other venues that host artisans and vendors are also struggling, he said. Those who needed an outlet for their wares contacted Sutherland and wondered what the next step would be.

Now he has an answer for them.

After a sale on Saturday to empty the contents of the former West Sioux Furniture, Sutherland and building owner John Sweets will begin remodeling the building known for years as West Sioux Hardware. Sutherland cannot give a specific date, but in 2023 he plans to announce the opening of a new Repurpose Project Center. 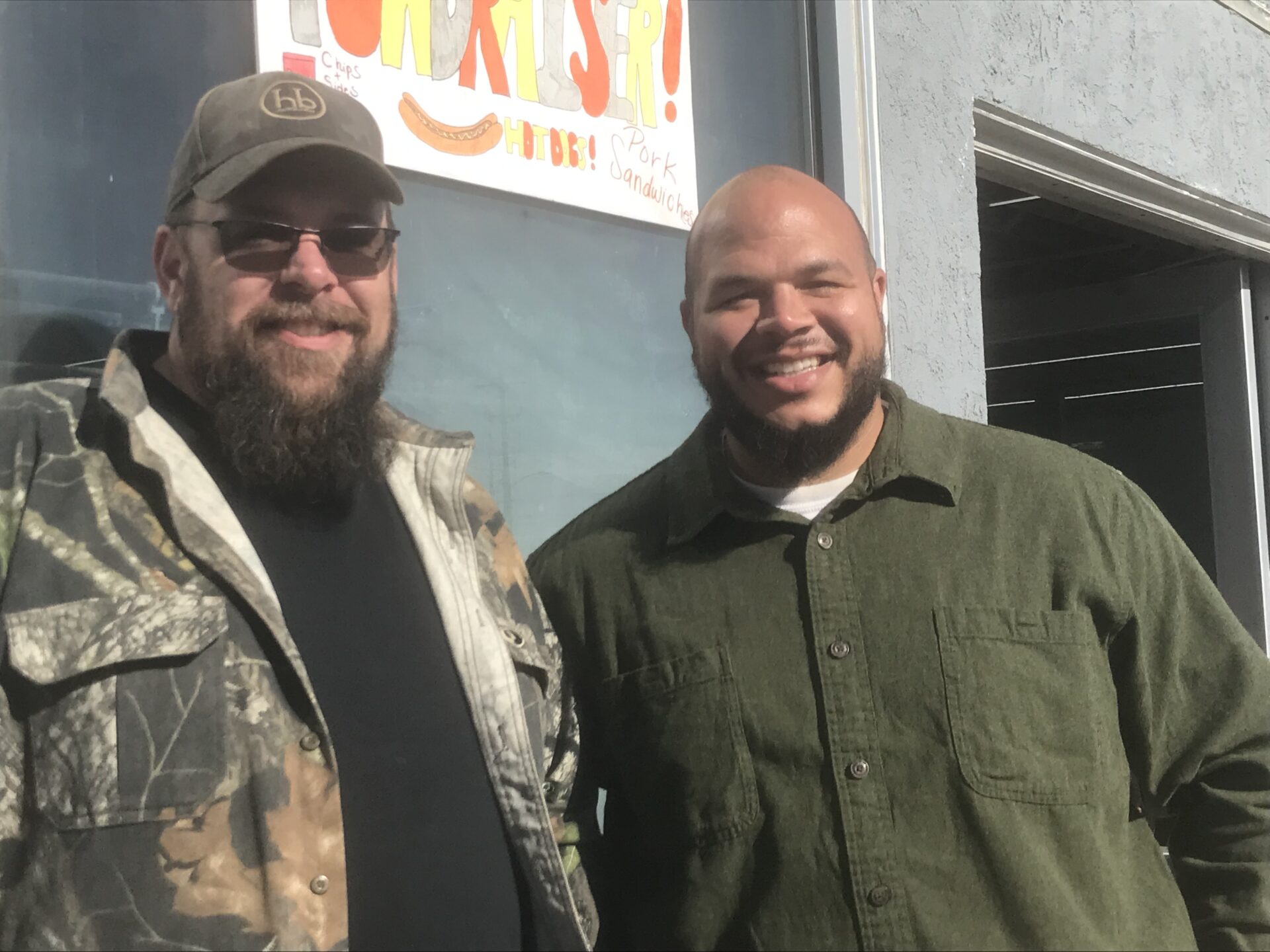 Sutherland will offer some of his own repurposed items for sale in the 8,800 square foot space his business will occupy, including his collection of antique books. Its main purpose, however, is to give other artisans and vendors a place for their work.

And one day they may be able to produce these objects in the back of the Repurpose Project Center.

“The long-term goal is to open our backyard area as a working salesman’s shop, which carpenters, painters and others can hire on-site,” Sutherland said. “It’s quite far in the future. We hope that the repairs can be completed and the store will be open and operational after the first of the year. We are not sure of a date now. 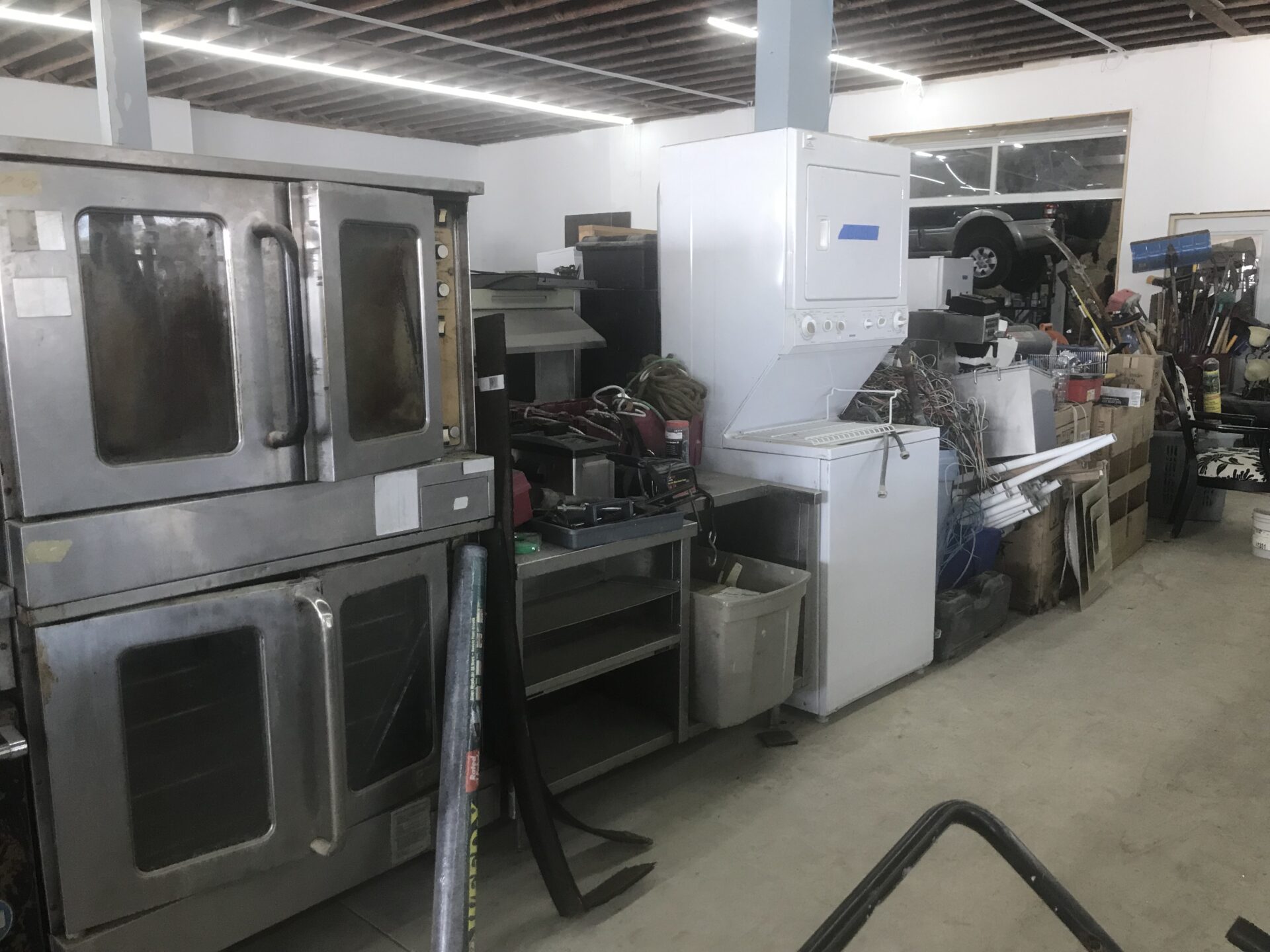 When Sutherland contacted Sweets to find new space for the Repurpose Project Center, Sweets suggested several newer buildings that needed fewer renovations. Sutherland, however, was drawn to the historic West Sioux region. A longtime resident of Sioux Falls himself, he knows the town’s history.

“West Sioux Falls had the original water well across the street,” Sutherland said. “It’s a great neighborhood with a great history, and the building has a great history.” 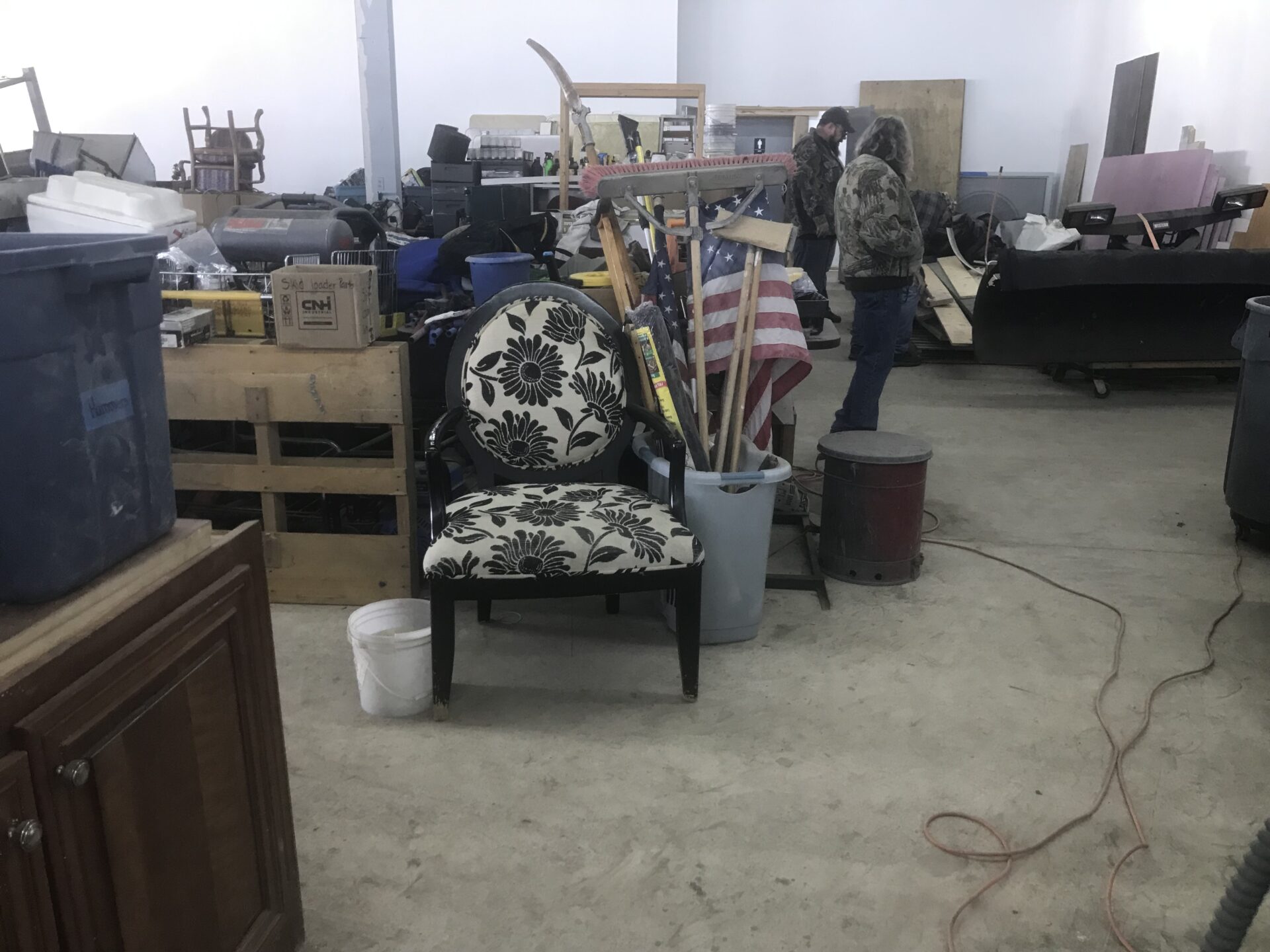 The West Sioux One Stop Store building was built in the early 1950s to replace an older structure that had been destroyed in a fire. Henry Brockhouse, son of the original owner, provided customers with hardware, paint, jewelry, groceries and a cafe. Most memorable was Brockhouse’s collection of mounted animals which he displayed behind glass at the north end of the store.

Brockhouse died in 1978 and the store closed in 1981. His collection of animals can today be seen at the Great Plains Zoo and the Delbridge Museum of Natural History. Brockhouse’s attorney, CJ Delbridge, had purchased the collection and donated it to the city. 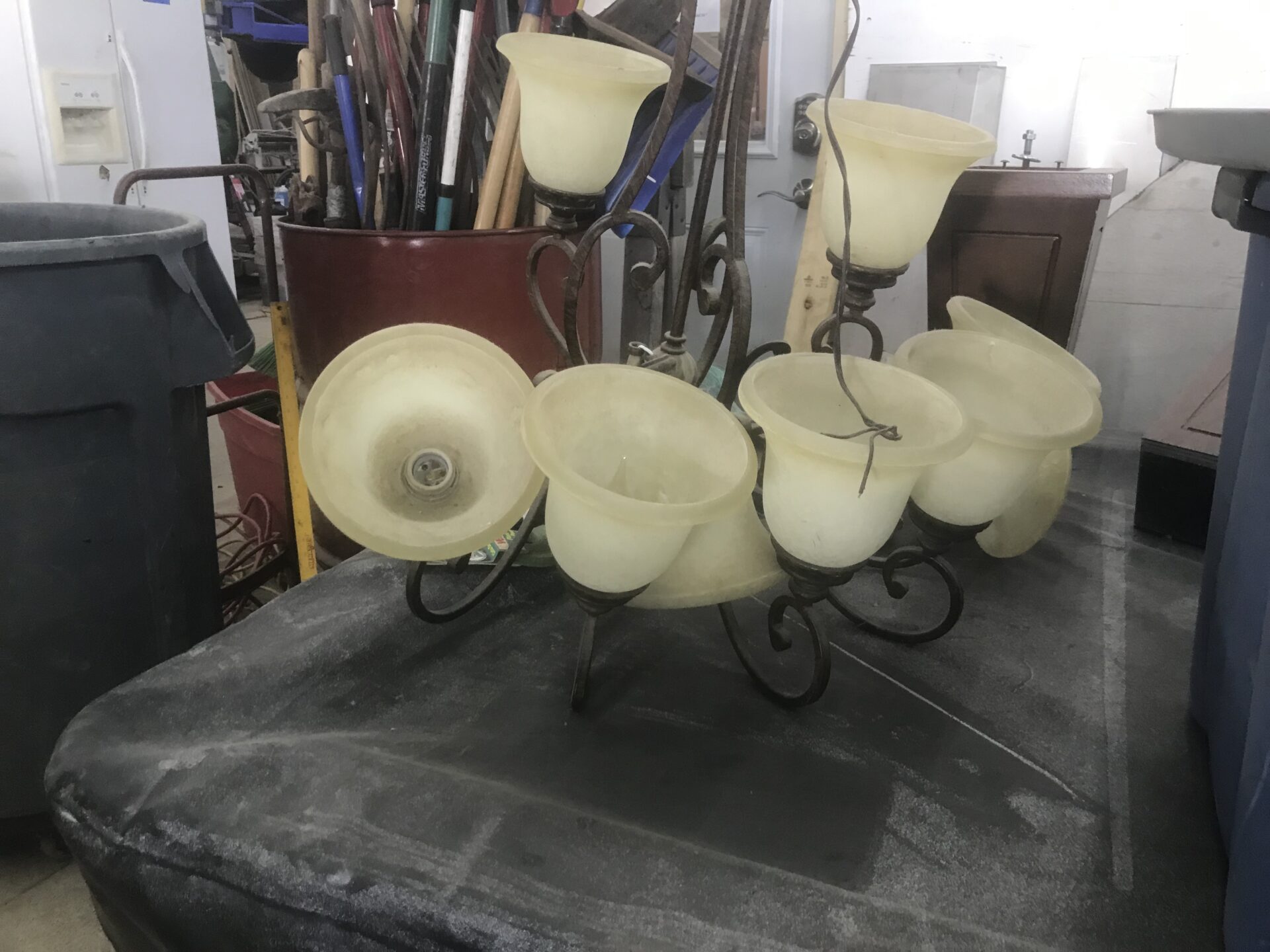 The building has known several owners and once housed a thrift store. When Sweets bought it about eight years ago, it operated West Sioux Furniture for two years before closing it.

Sweets, who is also a real estate broker, opened an event center in a corner of the 22,000 square foot building two years ago. West Sioux Kitchen & Venue can be used for receptions, meetings and seminars, birthday parties, showers, small weddings and other gatherings. Revenue from the event venue is designed to help improve other areas of the building. 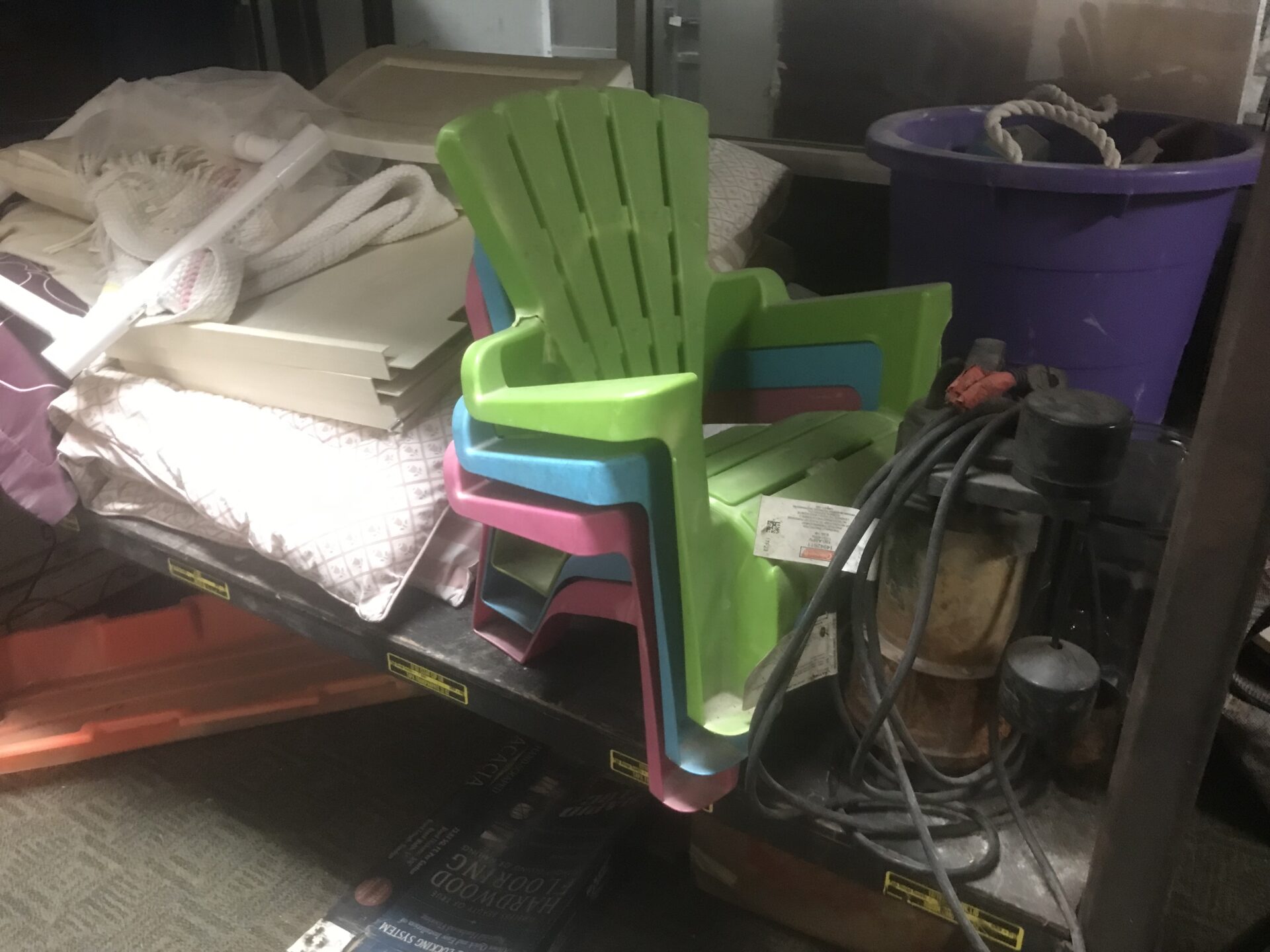 The proceeds from the weekend sale will also be used for the restoration of the building. Items for sale include architectural goods, industrial kitchen items, tools, building materials, furniture and, Sutherland said, just “stuff”.

A theater troupe once operated in the building and theater props are also for sale. 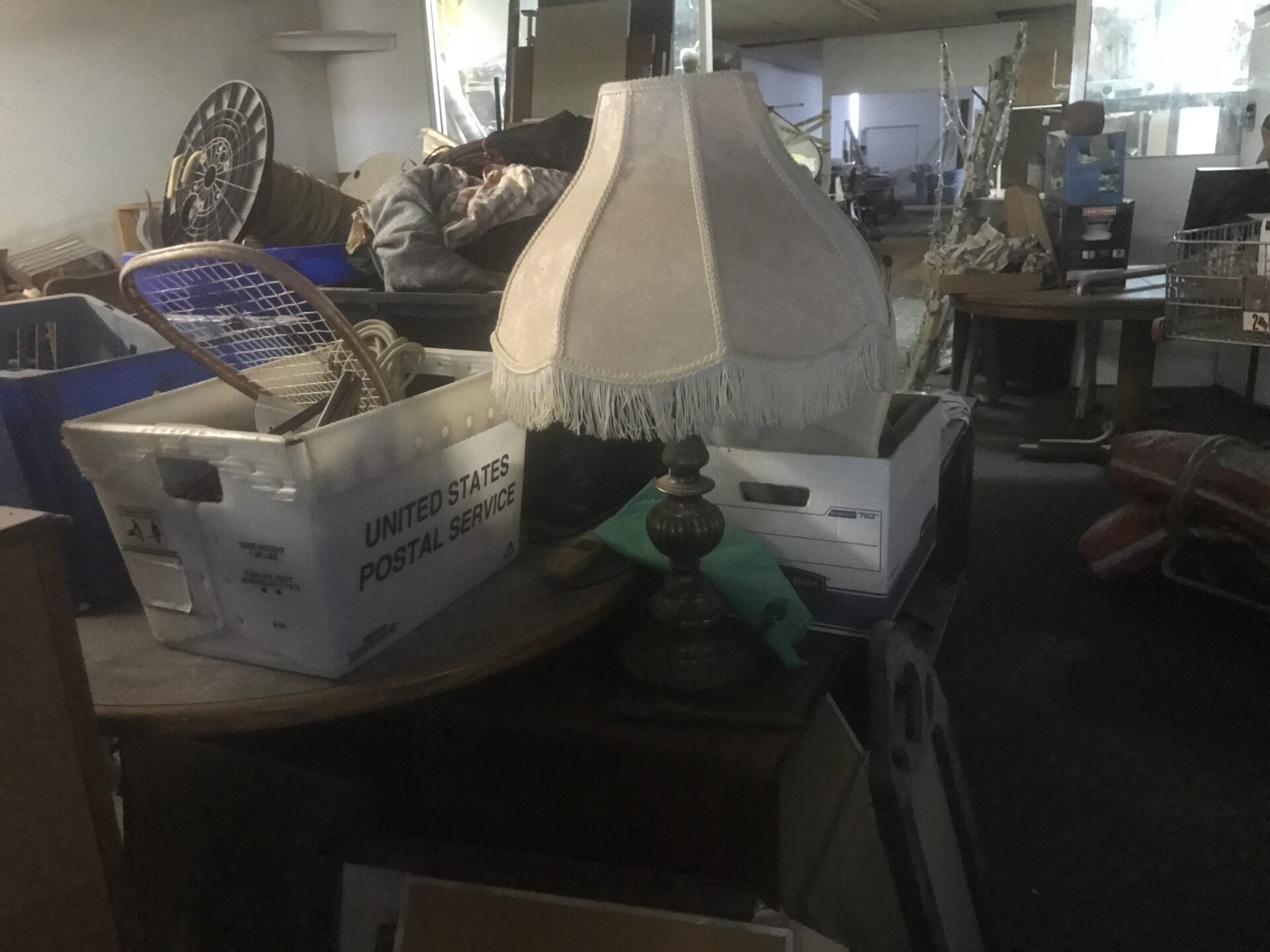 “The old McDonald’s on 41st Street that was torn down, we have all of their booths and tables,” Sweets said. “A subway that was demolished somewhere, we have their stuff. We have a bunch of items from George Boom Funeral Home before they tore it down.

Sutherland also owns and operates Hillbilly Paintworks Reclaim & Design, offering historic renovation as an interior painting contractor. He said he got the nickname “Hillbilly” growing up on the hillside of North Cliff Avenue. 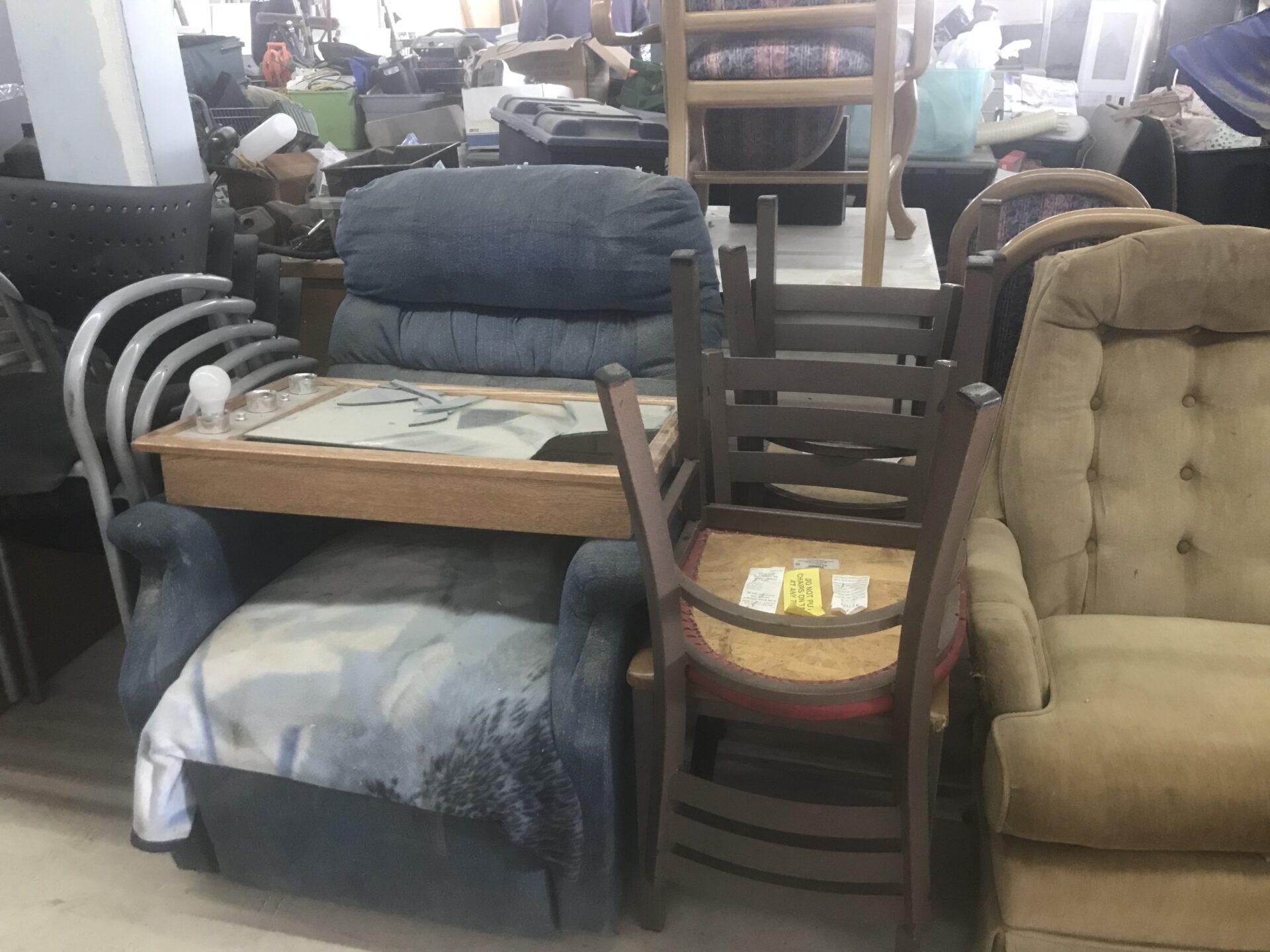 Sutherland is also responsible for saving several Sioux Falls icons such as Bob’s Drive-in sign, featuring a smiling waitress. The sign was sold in two parts, one landing at Zandbroz Variety and the other displayed outside a private home on Cleveland Avenue.

Neither he nor Sweets sees remodeling the West Sioux Hardware building as a business, but rather as a passion project, he said.

“I’m more than happy to fill this place with my own stuff,” Sutherland said. “But if I just have to sit in the doorway and cash people in because I don’t have room, I’ll just put my stuff outside. I want to help the seller community, and the seller community by renting spots will help this great idea.

The informally named Clean Out the Old West Sioux Hardware Building Sale runs from 9 a.m. to 5 p.m. Saturday at 2300 W. Madison St. The future reuse project center is adjacent to West Sioux Kitchen & Venue, a space at rent which is nearing the end of its renovation. West Sioux Studios, also in the building, offers private access for photography sessions and classes.