PC maker CLX Gaming has teamed up with Intel to create an enticing dual-PC platform. The big idea behind the proof-of-concept device is that simultaneous gaming and streaming will never overwhelm the currently unnamed PC model, with each critical task housed on its own independent PC in the rather modestly sized chassis chosen by CLX.

The PC you can see pictured throughout this article is not to be seen on the CLX website. It was showcased at the recent Intel TwitchCon Party & Intel Creator Challenge Finale event in San Diego, CA, which also served as the Intel 13th Gen Core Raptor Lake launch party. At such a sponsored event, you would expect Intel processors to be used in the build, and you would be right.

Besides the “main” PC, which has an Intel Core i9-12900K processor, the other PC housed in the Lian-Li O11 Dynamic EVO White chassis uses an Intel Core i9-12900 processor. This slightly less powerful CPU (in terms of performance and power consumption) sits on one of the Intel NUC 12 Extreme Compute Element compute cards. This design offers a much more compact system than most dual PC versions of the past. 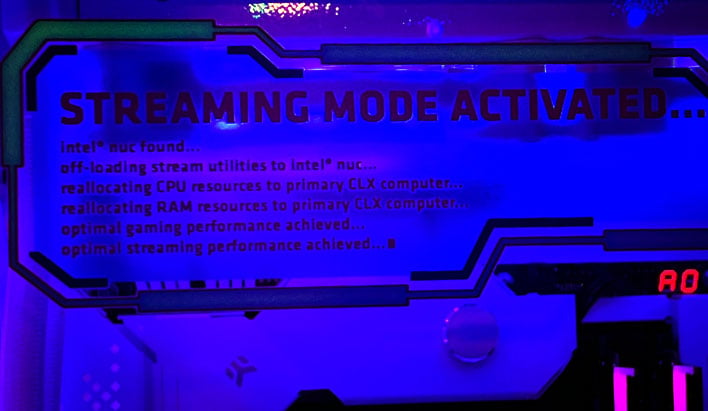 This system is intended to be the ultimate gaming and streaming PC. Twin systems can both perform their own targeted task without having to share performance hardware. However, they share chassis, power supply and input devices for compactness and convenience.

We have tabulated the technical specifications of this show Concept PC above. As you can see, the gaming side of the PC was state-of-the-art until the launch of NVIDIA’s RTX 40 series, and Intel processors will be “latest gen” in just a few days. However, as a concept, it is not commercially available at this time, and it would likely be updated with build options including all the latest generation processors, should it ever become a commercial product.
Share. Twitter Facebook Pinterest LinkedIn Tumblr Email