The influence of information technology (IT) on operations technology (OT) affects all areas of industrial automation, from networked smart sensors to virtual software deployment. The Industrial Edge is originally where OT meets computing – a bridge between two disparate technology cultures that helps connect legacy industrial systems to the computing world. Today, the role of the Edge is expanding… towards what?

Today’s automation solutions consist of a myriad of software applications installed on various systems and smart devices. Although these systems and devices are easily connected using contemporary computing technologies, they often have special requirements and priorities that cannot be met with standard computing tools and practices. Bringing the worlds of IT and OT together requires an environment with tools that take these requirements into account – a sort of last mile for industrial machinery. This is the emerging role of the Industrial Edge.

Recognizing the evolving role of the edge in industrial applications, Siemens embarked on a journey to develop a complete solution. The result is Siemens Industrial Edge – a platform developed for industrial users to integrate and manage a multitude of applications at the automation and control levels with all the advantages of a modern computer system.

According to ARC research, more than 65 million powerline systems are currently installed worldwide. The market is growing healthy and every year around 8 million new systems are added. Traditional API-based automation systems are revered for their robustness, reliability, and repeatability, and often reviled for their lack of openness and support for modern programming tools. Storing and evaluating raw data from industrial machines has never been a strength of the PLC. 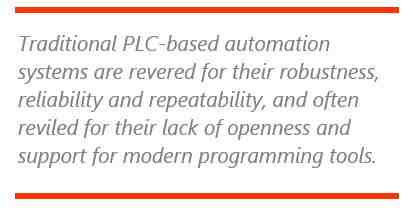 This is why users have often placed additional computing resources and sensors near the process to collect and analyze data and create actionable insights in real time. As the need for embedded analytics grew, the concept of edge computing in industrial applications was born.

Today, the Industrial Edge is a platform on which value can be added to existing automation systems. This value derives not only from hosting applications for near-process analysis, but also from the ability to centrally deploy applications and manage field devices in factories. These features are important because the amount of factory software will increase dramatically as automation solutions become more software-defined and users deploy more in-house developed applications.

Unlike traditional automation systems, IT systems are built on open standards with broad product offerings that create healthy competition, which in turn reduces dependency on vendors. As users migrate to open virtual architectures, it’s important that Edge solutions maintain this spirit of openness and vendor independence.

Managing apps and devices at the edge

IT admins in a midsize business typically manage hundreds or even thousands of devices. Their goal is to ensure the availability of computing resources by maintaining networks, installing new hardware and software, and managing network security. Most of these tasks are automated, a process called “orchestration”. As factory systems add more software and smart devices, they look more like computer systems and should be managed the same way.

At the intersection between IT and OT, the Industrial Edge is the right place to perform orchestration tasks such as application management (AM) and device management (DM). AM manages configuration and runtime software deployment, and tracks releases. The latter is essential in validated processes in regulated industries such as pharmacy. DM performs a similar task for tracking the configuration and firmware version of industrial devices. In addition, Edge platform functionality may also include user management (user access and privileges) and configuration management (determining authorized devices on the network).

Siemens Industrial Edge: An open ecosystem for applications and devices at the edge and in the cloud

With the 2019 acquisition of an edge computing platform, Siemens launched a solution that creates an open ecosystem

for hosting and managing applications and peripheral devices. Siemens Industrial Edge aggregates, deploys and orchestrates applications through containerization, allowing end users to run applications on edge or on-premises servers without any specific hardware configuration. Using Docker containerization, users can extend cloud applications to edge devices in factories from a central location, making it easier to manage large-scale, geographically distributed infrastructure. This model is particularly attractive to machine builders who are looking for a more standardized and easier way to deploy and manage software on machines installed around the world.

Siemens’ offering for the Industrial Edge has evolved into a comprehensive ecosystem of hardware and software solutions that add “shop floor computing” capabilities to automation systems.

Industrial Edge Management (IEM) is the tool used to deploy and manage edge software and to manage edge devices.

Keep the lid on apps

The IEM tool helps users deploy and manage software in containers. Popular in the IT world and increasingly used in industrial applications, containerization allows software to run reliably and consistently no matter where it is deployed. All applications, including customer-individual and third-party applications from ecosystem partners, are managed virtually in individual containers using Kubernetes monitoring. This is similar to running applications on virtual machines (VMs), except containers have a much smaller footprint because they share the operating system (OS) of the host machine rather than running an operating system on each VM. A single host using a containerization engine shares the operating system kernel with other containers, while each maintains its own isolated user space. If an application crashes, the rest of the system is unaffected. This reduces overhead, uses resources more efficiently, and improves system performance and availability. 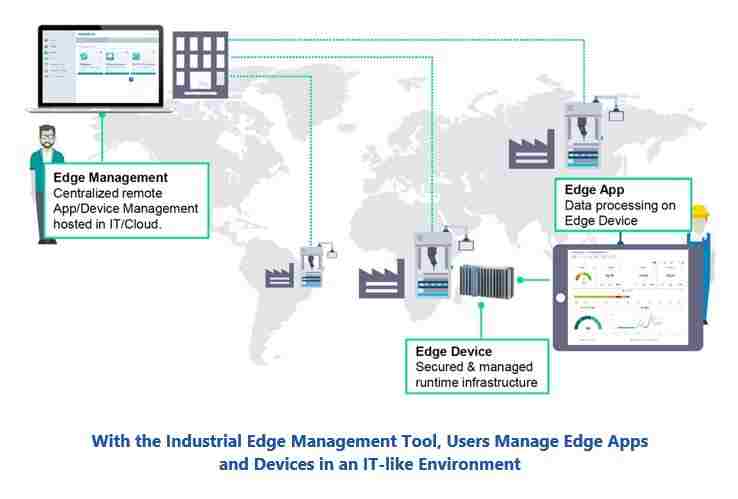 The independence and compact size of containerized applications means that they can be moved quickly and seamlessly from host to host, whether in public cloud, private cloud (on site) or on the outskirts. IEM allows users to track versions of every application and configuration, a much-needed feature in regulated industries.

Another key feature of IEM is device management and standard IT practice that is now being adopted in the industrial world as the number of connected devices increases rapidly. Using the Edge Device Builder Kit, smart devices become “edge-enabled” by installing embedded, industry-ready firmware on them. Once integrated into the Siemens Industrial Edge Device environment, the devices can be configured via the integrated configuration tool, which enables a host of functions such as user and access management as well as security to ensure ease of use. Typical device types range from APIs and IPCs of various performance classes to virtual machines and infrastructure devices such as switches.

Users can choose to configure and deploy their own applications, but many will want to take advantage of commercially available applications that can be purchased and downloaded from Siemens Industrial Edge Marketplace. This online application store offers a variety of solutions created by Siemens, for example for analysis, data storage, connectivity, preventive maintenance and energy management. Additionally, the Appstore offers third-party apps that have been tested and approved by Siemens. The company expects more than 200 partner companies to sell applications on the Industrial Edge Marketplace.

As its role has evolved, the Industrial Edge has become the “last mile” for industrial machines. In addition to providing connectivity between IT and OT systems, the Industrial Edge is now the IT platform within OT that creates a safe space for automation systems to be managed like IT systems, but with tools that take into account the specific needs and priorities of industrial applications. Some argue that the Edge is temporary and will disappear once automation systems become true IoT devices. But if IT and OT requirements differ, the Edge will be there to make sure those requirements are met.

For end users: The edge is where software and devices are managed, enterprise-wide security updates are scheduled, patches are managed, and operations are monitored with a clear view. centralized administration on several factory sites. Managing industrial systems in this way promises huge gains in efficiency and availability over current methods.

For machine builders, equipment suppliers and system integrators: the Edge has become an essential part of a complete IT factory solution. The Edge can be used during commissioning to deploy device configurations and software quickly and orderly. Additionally, an Edge platform can act as a gateway for remote services, enabling completely new business models for post-sale revenue streams.

If you would like to purchase this report or obtain information on how to become a client, please contact us